Osvaldo G. leaves his Long Beach home at 5 a.m. every morning to beat the traffic into West Los Angeles, where he works as an analyst at a research firm. “Leaving 10 minutes later can add 40 minutes to my commute,” he says. Together, he and his wife, who works a night-shift job closer to home, are typical young parents, raising two young daughters on a middle-class income.

But if you look further back, his story is not so typical. Osvaldo grew up in the San Joaquin Valley, about 100 miles north of Los Angeles, the third of four boys. His parents were farm workers; his father drove a tractor through the almond orchards during almond season and worked in the cotton gin or the grape fields during other parts of the year. His mother took over as breadwinner, working mostly in the grape fields after an injury left his father unable to work.

“Winters were sometimes tough financially,” he says, “When nothing was growing, and there was no work.”  While Osvaldo and his younger brother earned college degrees, his two older brothers and many of his friends did not.

Stories like his are often brought up to illustrate that upward mobility is possible if you just work hard enough. The “American Dream” is an important part of the country’s identity and one that most people still believe. But how typical is Osvaldo’s story? We know, from economic studies, that there are more stories like his in other countries. Economic mobility is higher in places like Denmark and Norway, which is maybe what you would expect. But it’s also higher in places like Canada and Germany. These days, the “American Dream” is more attainable outside of America. 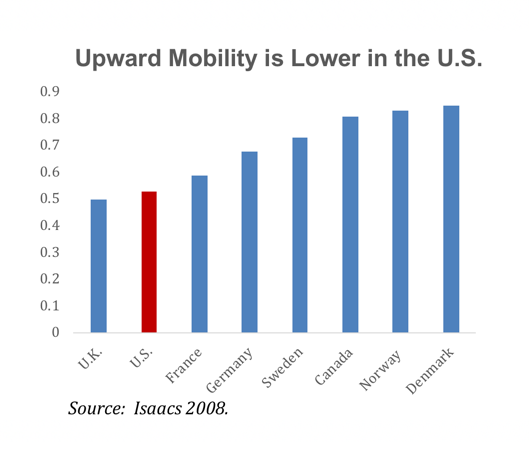 It’s also more attainable in California than it is in Georgia. A recent study by several economists used tax records from the IRS to look at rates of economic mobility across the U.S, and they find that it varies a lot. For example, take a child whose parents have income in the bottom 20 percent of all incomes, which is less than about $29,000. What’s the probability this child will end up with income in the top 20-percent of incomes as an adult?  The answer: It depends. If she grew up in Sacramento, she has about a 10-percent probability of reaching the top 20 percent. If she grew up in Atlanta, it’s less than half that.

The researchers focused on the approximately 10 million children born between 1980 and 1982.  With tax records, they reviewed the income of the families in which they grew up. Then they tracked those same children over time and looked at their income as adults.  Using this information, they calculated several measures of upward mobility for about 750 local areas across the U.S.  The local areas were defined as “commuting zones,” designed to span the area where people live and work.

The results are shown on the map, where darker shaded areas represent less mobility. The findings show that upward mobility varies most dramatically by region, with the lowest rates in the Southeast and the highest rates in the middle of the country. The West Coast and the Northeast are somewhere in the middle.  But the map also shows that mobility varies within a given state.

The findings were the same using different definitions of upward mobility. For example, if you grew up poor, how does your income rank as an adult compared with other adults?  Or, what is the likelihood that you have income above the poverty line as an adult if you grew up in a poor family?  Using those measures gives a similar heat map, with darker shades in the Southeast U.S. and lighter shades in the Midwest.

What about Los Angeles?  Its mobility rate is near the middle, among all of the U.S. commuting zones.  But within California, it ranks fairly low. In contrast, San Francisco and San Jose, maybe surprisingly, have fairly high mobility rates.  It’s worth noting commuting zones tend to be quite large in western, spread out areas.  The Los Angeles commuting zone, for example, covers Los Angeles, Orange, San Bernardino, Riverside, and Ventura counties. 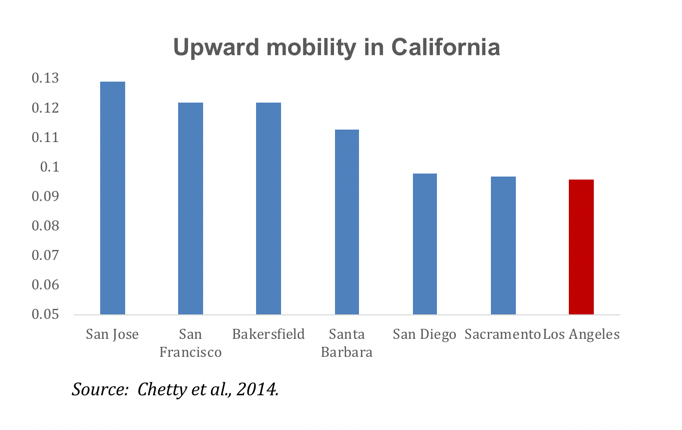 Second, is it really the place affecting mobility or is it just different types of people live in different areas?  Other research suggests it’s causal, meaning it’s something about the place itself that helps or hurts children’s chances, which matters because if it’s the place, then the next step is to think about how policies at the local level can help, like access to affordable housing, better transportation, and better schools.

But what policies would actually increase mobility? Answering that question starts with looking at the places with higher mobility rates.  How are those places different?  The study looked at a range of community characteristics, and several stood out. One factor was the level of segregation, by race and by income.  Poor kids did better as adults if they grew up in less segregated areas.

It’s easy to imagine why, and the researchers mention several possibilities. For example, children in less segregated communities are likely to have more access to diverse peers, role models, as well as better access to jobs when they grow up.

Since education tends to be funded at the local level, children in more integrated communities are likely to have access to better schools, since funding will be more evenly spread out. Thinking about the two hypothetical children mentioned earlier, Atlanta is a relatively highly segregated city, with a segregation index among the top 10-percent of the areas studied. Sacramento, in contrast, is much less segregated.

How does Los Angeles compare?  Researchers from the University of Virginia used 2010 Census data to create a Racial Dot Map of the U.S. Each dot represents a person, and each race is given a different color.  he map shows Los Angeles as relatively segregated. The white population, for example, is concentrated along the coast and in the hills, while the Latino population is further east and near downtown. The black population is concentrated in South Central, and the San Gabriel Valley is heavily Asian.

Richard Rothstein documents that the segregation existing today, not only in Los Angeles, but in other major cities, is a relic of segregated and discriminatory housing policies that began as far back as the New Deal. Cities today can help reverse these policies, he argues, by repealing zoning laws the prohibit the construction of affordable housing and by providing rental subsidies for lower-income families.

These issues are being discussed in Culver City as well, as residents consider ways to address the lack of affordable housing. Zooming in on the map to Culver City shows that it is one of the more integrated areas in Los Angeles. The colors tend to be more interspersed, although there are neighborhoods that are more heavily white than others.  But this map is based on data from 2010, and it’s easy to imagine things have changed in eight years; for example, as housing prices skyrocketed.

The authors of the mobility study conclude the main lesson from their analysis is “intergenerational mobility is a local problem,” and one that could potentially be addressed with policies at the local level.  Los Angeles, Culver City, and cities throughout California need to develop proactive and thoughtful policies in response. Osvaldo likes living in Long Beach, partly because he sees it as racially and economically diverse. The research says that this makes it a good place to raise children.