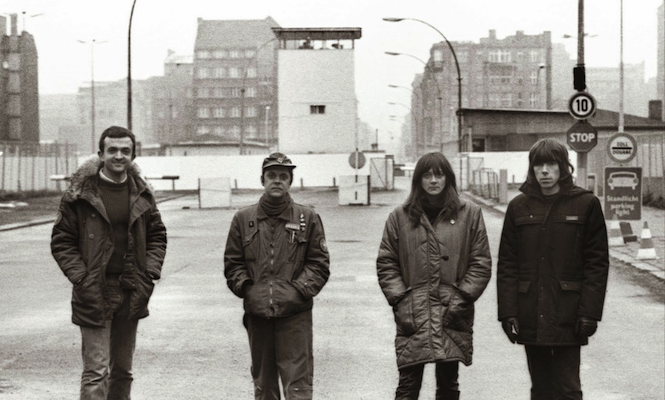 Culver City’s Veterans’ Auditorium has hosted events ranging from bodybuilding competitions, basketball, and roller derby to orchestra concerts, musical theater, and the annual rock and mineral show. It has also occasionally hosted other kinds of rock.

One especially notable performance was the American debut of the British band Throbbing Gristle, on May 22, 1981. Crucial in defining the genre of Industrial Music, Throbbing Gristle largely established the name by calling their independent record label Industrial Records.

Industrial music’s dystopian combination of punk attitude, Goth style, and electronic sounds has since been absorbed into mainstream popular culture, from Trent Reznor’s music for “Twin Peaks: The Return” and “The Social Network” to the sinister textures of some recent hip-hop and R&B.

This concert marks one of the first productions by underground music impresario Michael Sheppard. The opening acts were an early version of the joke metal-band SWA, led by Black Flag bassist Chuck Dukowski, and Vox Pop, which featured Germs’ drummer Don Bolles and future members of 45 Grave, in what Germs’ singer Darby Crash called “the worst band in history.”

A bootleg recording of this hour-long set was released on LP and CD under the title Dimensia in Excelsis and was included in an authorized limited-edition CD box-set called TG+, the second volume of their collected live performances, easily found now on YouTube.

Although the band did not name this album themselves, the artistic overreach of a misspelled Latin title suits the performance. Frontperson Genesis P-Orridge shouts almost nonstop into a microphone, heavily treated with echo.

There are some song-like segments, including their “hit” “Discipline,” as his vocals align with his bass-riffs, and drum-machine beats are occasionally heard, but mostly there are hums, pops, feedback, and other sounds of broken or abused electronics. One side of the rented sound-system malfunctioned throughout the show.

While groups such as AMM and the Los Angeles Free Music Society had been exploring these materials for years, they had existed mainly in obscure corners of the art world. Throbbing Gristle presented themselves as a rock band; they used simple, effective staging, including quasi-military uniforms and vintage pornography, projected behind the band.

A strange smell filled the space at the end of the show and may have been a special-effect, or an accidentally burned-out electrical device. In the tradition of Iggy Pop and The Who, P-Orridge hit himself several times in the head with his Gibson bass.

The Los Angeles Times ran an interview with P-Orridge on May 17, 1981, which helped fill the hall. However, several audience members were unprepared for the harsh loud sounds and fled as the show progressed. According to the Times’ review, published on May 25, 1981, many of those who rallied, climbed on stage at the end of the set, and the band chatted with them for an hour before packing up.

Among them was Don Preston, former keyboardist for Frank Zappa’s Mothers of Invention. P-Orridge was moved by the compliments from one of his early influences, but according to one account, this encounter led to his decision to break up the band a week later, after their second US show in San Francisco on the 29th.

He both feared Throbbing Gristle becoming an ordinary rock band and thought it would be appropriate for them to play their final live show in San Francisco, just like the Beatles and Sex Pistols, establishing them as the next British rock myth. However, P-Orridge had already announced the band’s split in the Times interview and, according to bandmember Cosey Fanni Tutti, the band ended because she dumped P-Orridge and began seeing bandmember, Chris Carter.

In 1982 Brian Eno told the Times that, although the Velvet Underground’s first album only sold a few thousand copies, everyone who bought one started a band. Throbbing Gristle’s Culver City show had a similar effect in the Southern California underground. People beginning to make post-punk music and transgressive art left the show inspired. The video projections were by Geraldo Velasquez, who was accompanied by Edward Stapleton; both were members of LA’s own pioneer synthpunk band Nervous Gender.

Multimedia artist John Duncan, who was at the show, said, “the lasting effect on my own work came far more from spending the afternoon with Cosey and Chris, talking with them, agreeing to work together, which for me, was a dream come true. Even more, it gave a chance to thank Cosey in person for the solo work she’d done, for the courage it took to put herself in her images, which went well beyond standing in front of a camera. I remember them saying we’d chosen the same color for the walls of where we lived, based on its subtle yet pervasive psychological effect. I remember them taking a look at the teapot in the kitchen, the glances they exchanged before they showed me how to clean it.  That day was the beginning of a friendship that has lasted for decades.”

Stuart Swezey and Mariska Leyssius were also in the crowd. Two years later they began Desolation Center, organizing a series of punk and experimental music concerts in the Mojave Desert and other unusual locations. Among the attendees at these shows was John Law, who was one of the five founders of Burning Man.

Mariska also played keyboards in a band called Psi-Com, whose singer Perry Farrell went on to somewhat greater fame with his next band, Jane’s Addiction, and the Lollapalooza Festival he created. She and Swezey have recently completed a documentary on Desolation Center. Among items from her archives, used in the film, are her photos from Throbbing Gristle’s Culver City show, which appear here with her generous permission.