On Thursday, April 26, approximately 350 attendees convened at the 3% L.A. Minicon, held at the Deutsch L.A. Steelhead Studios in Culver City. The mission: to bring awareness to diversity issues in advertising, media and technology.

But what is the 3 percent? According to the 3% Movement’s founder, Kat Gordon, only 3 percent of creative directors in advertising are women, and even fewer are women of color. At the same time, men only dominate three sectors in the marketplace, meaning women are not the subgroup but the “supergroup” of advertising’s target audience. And yet: Where are the women in the pitch meetings? Gordon started 3% seven years ago in the heart of Silicon Valley to change the percentage. The goal is to get the numbers of women in media up to 50 percent.

The organization, which launched as a conference and now also advises advertisers and other media, including Hollywood, has been making an impact. Last week’s event drew a diverse group of many of California’s creative leaders, including John Elder, co-founder of Heat; Jean Freeman, CEO of Zambezi; Pam Fujimoto, executive creative director at Wong Doody; and Kate Bristow, chief strategy officer at M+C Saatchi. Several Silicon Valley leaders were present, including J.D. Swartz, VP/general manager of creative and digital at Salesforce, and Michael Lourdeaux of Silicon Valley Executive Network. 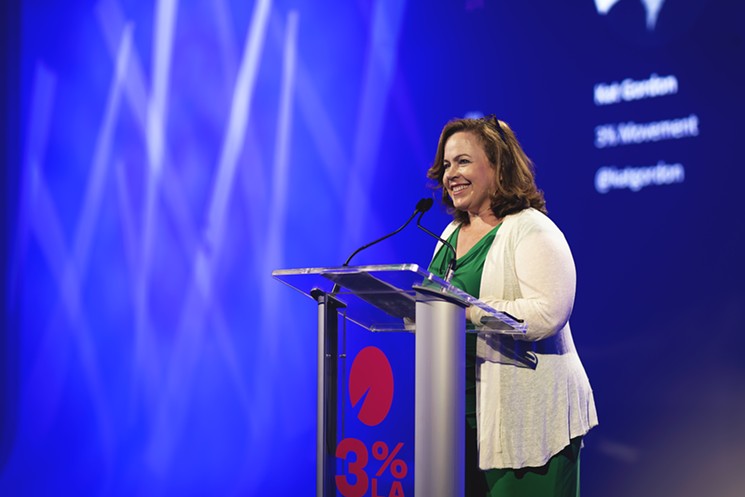 Kat Gordon founded the 3% Conference to increase the percentage of women represented in leadership in media.

“In year seven of our crusade for diversity, it’s inspiring to see how tech and media are illuminating inequity, building empathy and offering solutions that make workplaces more fair for all,” Gordon told L.A. Weekly following the one-day conference. “I was blown away by the passion and vision of the 30 speakers who spoke at our L.A. event and I’m more hopeful about the future, having experienced this gathering.”

Hollywood was there, too. As was the true star of the conference, 13-year-old student journalist and activist Mina Enayati-Uzeta, who lives in Los Angeles with her parents and younger brother.

On a panel titled “Representation Matters: If You See It You Can Be It,” Enayati-Uzeta was invited to share her opinions along with April Reign, creator of #OscarsSoWhite; Madeline Di Nonno, CEO of the Geena Davis Institute on Gender in Media; and Michelle Wong, partner at Dailey, in a lively discussion moderated by Kristin Hayden, chief partnership officer at Ignite.

As the panel neared its end, Hayden asked the participants: “In a very practical way, how can all the folks in the room now do something, wherever they sit in their workplace, to actually create an environment of inclusivity?”

Di Nonno was the first to respond. “If you’re a parent or caretaker, it can start with you. It’s less about censorship and more about having a narrative and a discussion. ‘Couldn’t that character — the baseball player, the scientist — have been a girl? Or, ‘Why is she dressed like that if she’s going to save somebody?’” she asked, as the audience laughed, knowingly. “Or couldn’t she have saved herself?” she asked to even more laughter and acknowledgement. “So as a parent, it’s really, really important to watch what [your kids] are watching with them. When it comes to [Hollywood and] scripts, we have a great tool. It’s what I call the ‘Spell Check for Gender Bias,’ so we are happy to put eyes on it for you if you’d like that kind of benchmarking help.”

Wong, who works in advertising, said, “I think we can be advocates for one another, which takes me back to it’s not a moment, it’s a movement. A few weeks ago I was in a meeting where more than two conversations were going on at once, and I felt like no one heard. And it was an unfortunate moment. My colleague, an account supervisor, she said, ‘That was a really great point, Michelle. I’m not sure everyone heard it. Do you mind repeating what you said?’ And I was really taken by her initiative but also [by the fact] that this is in the air and this is changing and we are helping each other to have our voices be heard. And this is a really easy thing we can do to lift each other up.”

Hayden noted the importance of “sponsors,” a 3% concept of people who are advocates for others, publicly or privately. “If you have the privilege to have the access to who’s behind [otherwise] closed doors, remember who’s not behind those doors and advocate for them.”

Enayati-Uzeta referred back to Di Nonno’s points: “I think this goes for people in advertising, people at agencies and parents: realizing that what you do, and your actions, really have an effect, no matter how subconscious the action is, on other people,” she said. “If you’re a mom, and you’re always playing second fiddle to a male in your life, that sends a message to your daughter. If you’re a husband, and you’re always screaming at your wife or daughter, that is sending a message to your sons. And if you’re in advertising and you’re only casting white women and white men, that sends a message. So just be very aware of your actions.” 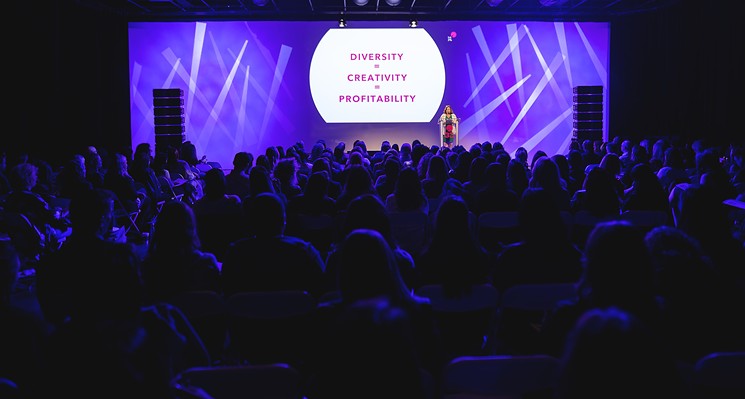 More than 350 people gathered at the 3% L.A. MiniCon to support diversity and representation in advertising and media.

April Reign of #OscarsSoWhite spoke about group advocacy. “For the folks in the room who are not in a position of power, remember that there is power in numbers. So when you have issues, and you are the one or one of the few, from any marginalized community — whether it’s race, gender, disability, sexual orientation — either you need to figure out how to get more people in the room, so you can be more supportive, or before those meetings you need to find your tribe, so when you stand up and say something important that may seem controversial because it’s not part of the status quo, you know that your behind isn’t on the line out there by yourself, that there is somebody else in that room who is going to say, ‘You know what? Michelle had a great idea, let’s see how we can build on that,’” she said. “Who are the folks that you can rely on to create coalitions when you are having these difficult discussions?”

Concluding on an upbeat note, despite noting the prevailing under-representation that exists across every industry, Hayden asked, “What is inspiring you right now in this conversation?”

“Mina,” said Reign, point blank, to appreciative laughter. “The fact that there is a 13-year-old young lady up here who can articulate what the issues are with respect to representation, and that she can take it from the personal to what’s going on in her household and other households that she’s seen, and translate it to what folks can understand in the real world, is phenomenal. So Mina is what’s inspiring me right now.” Claps, cheers and laughter followed.

“Can I give a shout-out to 3% for this?” Hayden said. “Many of you are organizing conferences. Think about that, the youth voice, it’s not that hard.”

In turn, Enayati-Uzeta gave credit to the Parkland shooting survivors. “They are not that much older than I am and they are making such a difference rallying so many people behind their movement. They have lit more fire to my passion and made me want to do more.”

Later, she shared with L.A. Weekly why it felt important to participate as a youth representative.

“As we were saying on the panel, there are not a lot of young people who are being represented. That’s another representation issue, for many reasons,” Enyati-Uzeta said. “Either people don’t think we have a lot to say, or when we do, they don’t think that what we are saying makes any sense or is practical or that we know what we are talking about. But as the Parkland students have shown us, we do know what we are talking about and we are ready to take action with or without adults.”

Her mother, Amanda Enayati, was also a panelist and is the author of Seeking Serenity: The 10 New Rules for Health and Happiness in the Age of Anxiety and the head of of culture innovation for 3%. She echoed her empowered teen daughter’s sentiments about the conference.

“It was a day of inspiration, connection, elevated conversation — and, perhaps most importantly, concrete plans for action. Representation not only matters, it’s pivotal to any and all innovation.”