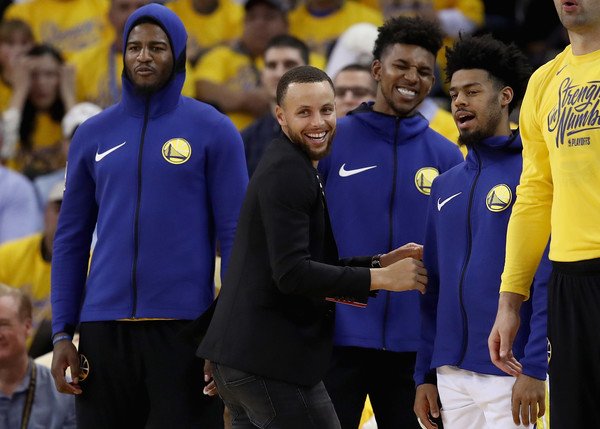 Stephen Curry #30 of the Golden State Warriors reacts on the bench with Nick Young #6, Jordan Bell, and Quinn Cook #4 during Game Five against the San Antonio Spurs of Round One of the 2018 NBA Playoffs at ORACLE Arena on April 24, 2018 in Oakland, California.

*Sony Pictures has locked down Golden State Warriors star Stephen Curry with a new multi-year development and production deal that spans film, television, and worldwide partnerships operations. It’s billed as the biggest media deal of any athlete to date, according to Variety.

Under the pact, Curry’s newly launched production company, Unanimous Media, will develop and produce film and television projects with a focus on family, faith, and sports themes. The deal also includes opportunities in partnerships, electronics, gaming, and virtual reality.

Unanimous Media headquarters will be located on the Sony Pictures studio lot in Culver City.

“Steph is a transcendent figure in current culture. His wide-ranging content creation interests overlap well with our varied businesses and we have been equally impressed with his team,” Tom Rothman, chairman at Sony Pictures Motion Picture Group, said. “We are honored to have been drafted and now we know how lucky Golden State feels every day.”

“I’ve been blessed to have this platform and I want to use it to affect the world positively,” Curry said. “Partnering with Sony to share inspiring content with a global audience was a foregone conclusion.”