CULVER CITY, CA – October 21, 2020 – Two weeks before the election on November 3rd, Culver City Council candidate Yasmine McMorrin is racing toward the finish line with an array of campaign events, including a virtual rally, a postcard party, phone banking, text banking, and a final episode of her popular discussion series, Connect with Yasmine. 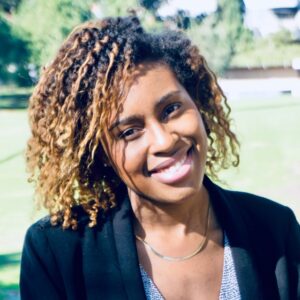 “I’m not letting up until the final vote is cast,” stated McMorrin. “Culver City is at a turning point in its history. This election is too important, the stakes too high, not to give everything I have right up to the last second of the campaign. My focus is to continue to get my message out to voters, and to make sure voters know all of the different ways that they can participate in our democracy and vote.

“Our community is more engaged than ever,” McMorrin continued. “Voters are hungry for representation that reflects their values of equity and inclusion. I plan to represent those voters, and embody those values if elected to the Culver City Council.”

Connect with Yasmine streams live on Facebook and Youtube. Past episodes, which feature a range of guests discussing the most pressing issues facing Culver City voters, can be viewed at mcmorrinforculvercity.com/events-videos.

Yasmine McMorrin is hosting Office Hours on Wednesday, October 21st — sign up for a time slot to speak directly with the candidate at doodle.com/poll/7pns37qmy26txxbr.

A final campaign Zoom Postcard Party will be held on Thursday, October 22nd from 4:00 pm to 6:00 pm, to inform voters about the upcoming election, and why Yasmine McMorrin is the best candidate to elect to Culver City Council. More information on the Postcard Party is available on the campaign’s website: mcmorrinforculvercity.com.

“I want to express my sincere gratitude to all the volunteers, supporters, donors, and endorsers who have given to the campaign,” said McMorrin. “Their strength and passion have fueled my campaign, and inspired me to work even harder for the people of Culver City.”

Yasmine McMorrin works as Interim Dean of Students and Director of Diversity at USC’s Gould School of Law. She serves as Vice-Chairperson of the Culver City General Plan Advisory Committee and is a Member of the Culver City Unified School District Equity Strategic Planning Committee.

If elected, McMorrin would be the first African-American woman to serve on the Culver City Council, and only the sixth woman elected to the Council in the city’s more than 100-year history.