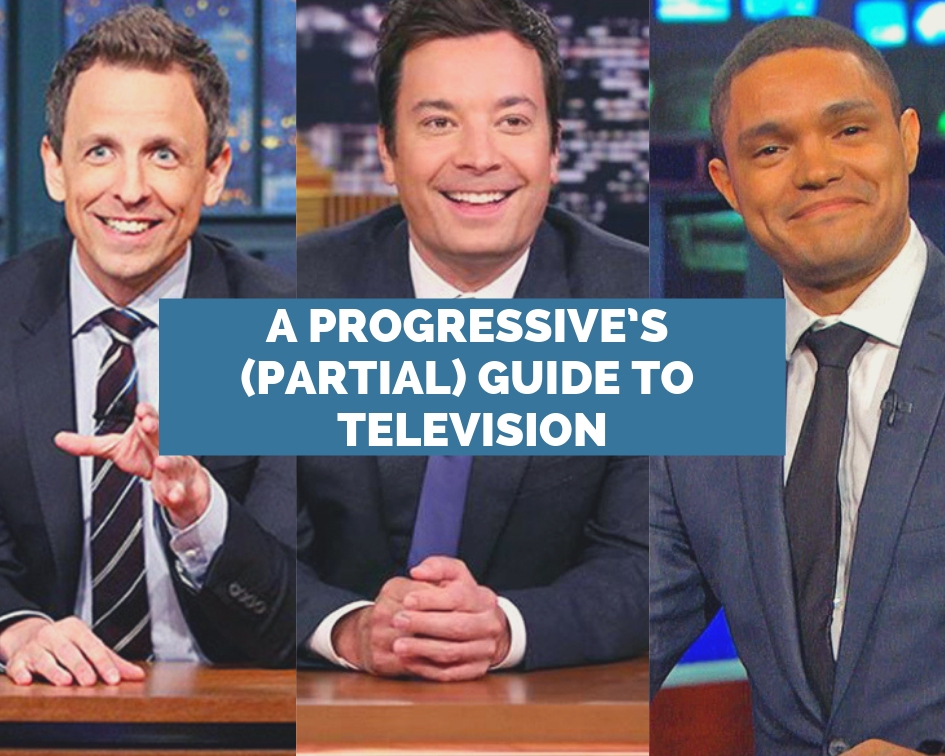 It’s no surprise with today’s volatile climate that political discussion, review and comedy seems to have surpassed all other television genres, still expected in the 24-hour news cycle, but now dominating morning shows, and eclipsing any other topical subjects on late-night talk.

Our non-presidential president, has, for the last two years, provided patter and fodder, not merely weekly, not even on daily, but just about hourly. We’re no longer incredulous. We’re no longer shocked. We’re just embarrassed.

And what’s left (literally and figuratively)? To pay attention, to speak out, to vote. And have a laugh.

As the title of this review implies, this isn’t for the 24/7 Fox News fan. As the Potus spin cycle, Fox News is the destination for the right-wing viewer. While miles less partisan, MSNBC offers up actual news and series featuring such left-wing icons as Rachel Maddow. Luckily for those “across the aisle,” there’s TV fare, not just for those with cable service, but also on “regular” network television.

Here are some suggestions to whet your liberal appetite. If you’re an early-to-bedder, look to DVR-ing or YouTube clips.

The Late Show With Stephen Colbert, Monday through Friday, 11:35 p.m. on CBS. Colbert was a standout on The Daily Show with Jon Stewart, and garnered his own long running (nearly 1,500 episodes) show, The Colbert Report, starring his “conservative” alter-ego.

When it was announced that Colbert would be taking the helm on the popular late-night talk show (8 September 2015), viewers wondered how the improvisational comedic actor would make the transition from his iconic character to “himself.”

The shift was undetectable and Colbert quickly established himself as a whip-smart political observer. There was a time when the show’s monologue touched on what was happening in the state of the union, but given the plethora of material available, it’s become the central focus of the opening, and really, throughout each episode.

Colbert offers brilliant and insightful observations, and his candor, coupled with his clearly genuine and emotional responses draw fans to him.

The Late Night with Seth Meyers, Monday through Friday, 12:30 p.m. on NBC. Meyers caught the public’s attention as an anchor of Saturday Night Live’s “Newscast,” and now, Meyers daily examines the machinations of the national’s political machines. His “A Closer Look” is a sharply observed well-researched view, taking on the Trump Administration and other topical subjects (#metoo, et ect.)

The Tonight Show with Jimmy Fallon, Monday through Friday, 11:30 p.m. on NBC. With a time-slot that directly competes with Colbert, Fallon (like Meyers, an SNL alum) focuses more on gimmick-driven standard bits (“Lip Sync Battle,” “Hashtags,” “Thank You Notes” and “Slow Jam the News”).

Whether it is because Colbert’s spot-on daily political updates are too keenly presented or because of the tradition of “The Tonight Show,” the affable host chooses not to make political commentary the primary focus of the show’s comedy. But when he does, he does so well, thanks to his writers understanding the host’s strengths.

The one-time host of “Politically Incorrect” stars each week of his live-in-Los Angeles’ cable series with a monologue, updating his studio audience of the week’s trials and tribulations, followed by a seated one-on-one interview with a person of note.

The rest of the series features a bi-partisan panel (when someone from the right is brave enough to guest). Frequently, there are frustrations and irritations and fracas amongst the guests, and occasionally, with Maher himself.

Kimmel and Fallon follow the schedule of monologues, talk-show guests, skits and musical guests. Kimmel made the news with his emotional appeal for better health-care in the U.S. when his not-quite-a-year-old-baby suffered serious health issues.

The Rachel Maddow Show, live Monday through Friday 9 p.m. ET on MSNBC. For an in-depth, spontaneously delivered, but a well-researched and thought-out examination, tune into the famously liberal, famously brilliant Maddow (she’s an Oxford and Stanford grad).

She told the bi-weekly Valley Advocate, an alternative newspaper, “I’m undoubtedly a liberal, which means that I’m in almost total agreement with the Eisenhower-era Republican party platform.”

Maddow is earnest, emphatic and her credentials are impressive. She’s much less about delivering humor along with the news, but her presentation is always thorough. Watch carefully and when you are able to pay attention.

It’s typical of the self-deprecation she reveals. Bee displays all the best traits of the best kind of boss –she’s not afraid of getting dirty and allows her staff to “run with” ideas. Standouts on the series include funny and wry African American Ashley Nicole Black and incredulous Brit Amy Hogart.

Last Week Tonight with John Oliver, Sundays 8:10 EST on HBO, yet another “Daily Show” alum, is a Cambridge grad (and, like Monty Python members, a Footlights’ alum, too), who is as self-deprecating as Samantha Bee. He pokes fun at his native U.K. and is relentless in his exposes’ of Donald Trump and the dubious Trump administration.

Oliver isn’t afraid to go out on a limb–not only did he famously travel to Russia (and he doesn’t care to return, thank you very much), but landed a one-on-one interview with Edward Snowden. Oliver brilliantly tackles topics that on the surface seem dull, but wholly relevant.

One such episode was the series’ fifth episode on the often-misunderstood “Net Neutrality,” and he very recently explained the “Attorneys General” (and yes, pointing out that is indeed the correct verbiage and spelling).

The Daily Show with Trevor Noah, weeknights, 1 p.m. on Comedy Central. Fans of Jon Stewart were floored when the veteran commentator, comedian, and actor announced he was leaving the show that, for many, supplanted network news.

Noah, a then little-known mixed-race South African, exceeded expectations (even if he still doesn’t garner as significant an audience as Stewart). Under Noah, the show was nominated for a Writers Guild Award, a GLAAD award and two NAACP Image awards. He was named 2017’s “Best Host” at the MTV Movie & TV Awards, and also took home a Creative Arts Emmy.