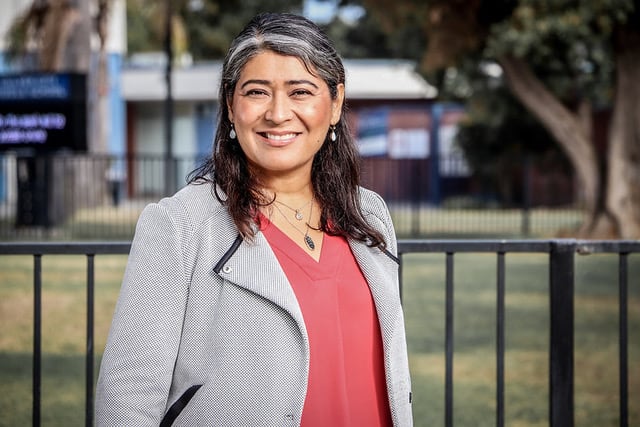 When the Democrats took over the House in 2018, Congress was transformed into one of the most historically diverse congressional bodies of all time. Forward to 2020, records continue to be broken with a total of 75 Latinx women running for seats in Congress. However, the Latinx community continues to remain underrepresented in elected offices across the spectrum.

Paula Amezola wants to be a part of a wave of Latinx women making an inaugural bid for elected office in the Culver City Board of Education race. Amezola’s campaign says, “When Paula first considered running for the school board, she had no idea a pandemic would bring into such stark relief the issues close to her heart –– Equitable Education, Health and Wellness, and Affordable Housing.”

A first-generation American, Amezola shuttled back and forth between the United States and Mexico while her parents worked hard to make ends meet. Speaking of her humble upbringing that was “devoid of any role models,” Amezola references the challenges she faced during her education –– how she and her siblings were “tracked” into low-performing classes, how counselors discouraged her from taking honors classes and how she was dissuaded to apply for college because it was “too expensive” for her.

After Amezola’s parents demanded access to college preparatory classes, she would meet the teacher who would play a key role in changing the course of her life. Recognizing Amezola’s potential, her teacher encouraged her to apply to the University of California and helped her navigate the application process.

Amezola credits this teacher for her acceptance to UC Davis –– but she didn’t stop there. After graduating, she went on to earn a Master of Public Health in Epidemiology. Today, she has continued her trajectory as a Career Services Advisor at the Keck School of Medicine, University of Southern California.

A strong advocate of local civic engagement, Amezola has also served years of public service, most recently being appointed to the Culver City Parks, Recreation, and Community Service Commision (PRCS). In 2020, she asks voters to support her bid for the Culver City Board of Education.

As a parent of two in Culver City Unified School District (CCUSD), Amezola has observed “how the district does not serve all students equally” citing, for example, “how English language learners score significantly lower than native speakers on standardized tests, and only 25% leave Culver High prepared for college.”

This experience, Amezola says, is her inspiration to be a “determined advocate for education that nurtures and supports the success of all students.” This –– along with the personal understanding of the difference just one person can make –– is why Amezola says she is “thrilled and honored” to run for school board.

If elected, Amezola will be the second Latinx woman to sit on Culver City’s school board. She is endorsed by Vice Mayor Alex Fisch.