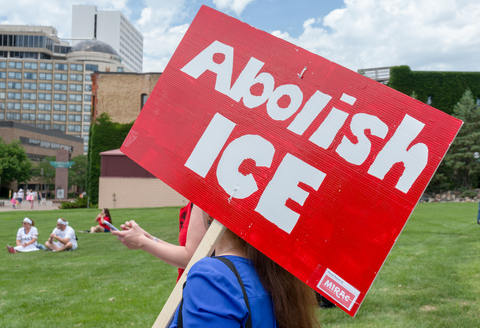 An Open Letter to Abolish ICE

As nationwide mass protests denounce the Trump administration’s immigration policy of the separation and jailing of migrant families, CC Vice Mayor Meghan Sahli-Wells, Councilmember Daniel Lee, CCUSD Vice President Kelly Kent and School Board Member Katherine Paspalis along with more than 100 state and local elected officials throughout the U.S. have released a joint statement to abolish ICE (formally known as The Bureau of Immigration and Customs Enforcement).

The statement also reports Congress member Mark Pocan (U.S. representative for Wisconsin’s 2nd congressional district) is planning to introduce legislation to abolish ICE. Pocan issued a statement, “From conducting raids at garden centers and meatpacking plants, to breaking up families at churches and schools, ICE is tearing apart families and ripping at the moral fabric of our nation. Unfortunately, President Trump has so misused ICE that the agency can no longer accomplish its goals effectively.” Pocan continued, “This week, my colleagues and I are introducing legislation to end President Trump’s use of ICE as a personal deportation force and implement an immigration system that upholds the dignity of all individuals. By abolishing ICE and transferring its necessary functions to other agencies, we can ensure that the President can no longer terrorize countless immigrant families while making our nation safer from actual threats.”

Why Culver City Leaders Support It

Vice Mayor Meghan Sahli-Wells
“ICE was created just 15 years ago. During that time, it’s been plagued by abuse and mismanagement to the point where even ICE agents themselves have called for its abolition. We must send a clear message to the administration that rips babies and children away from their families: their policies of zero tolerance are immoral. We call for an end to this failed agency, and demand the creation of an immigration system that upholds human rights, and human decency.”

Councilmember Daniel Lee
“ICE is an organization that has violated the humanity of individuals and families in the name of safety without regard to the profound and long-lasting impact inflicted on children and families. It is an organization that never should have been formed and whose existence will not be mourned. All elected officials who believe in human rights should call for its abolition.”

School Board Vice President Kelly Kent
“I’m proud to support Congress member Pocan in his righteous work to abolish an agency that conducts state-sanctioned torture, and inflicts permanent trauma on children. Trauma profoundly impacts any child’s access to education and has consequences that ripple throughout the communities surrounding even just one traumatized child. What future are we condoning if we are silent, as not one, but thousands of children are suffering this way?”

Critics maintain ICE’s practices “marked a shift towards an enforcement-only approach to immigration policy that treated immigration as a public safety threat and immigrants as less than human.” Established in 2002 following the events of 9/11, ICE operates under the jurisdiction of the Department of Homeland Security (DHS).

OIG’s most recent report (June 26, 2018), “ICE’s Inspections and Monitoring of Detention Facilities Do Not Lead to Sustained Compliance or Systemic Improvements” concludes “contracted inspections [are] too broad, ICE’s guidance on procedures is unclear,” and “ICE does not adequately follow up on identified deficiencies or consistently hold facilities accountable for correcting them, which further diminishes the usefulness of its inspections….some deficiencies remaining unaddressed for years.”

Between 2010 and 2016, 33,000 alleged incidents of ICE abuse in immigration detention have been reported. Despite an official policy of limiting activities in “sensitive locations”–ICE routinely raids warehouses, hospitals, churches, and schools to round up immigrant and refugee families.

Human rights organizations such as the American Civil Liberties Union, Human Rights Watch, and Children’s Defense Fund cite unethical practices including warrantless arrests and disregard for due process that result in the devastation of families and communities nationwide. Critics say ICE’s 2018 budget, of $7.6 billion, is being used to “violate basic human rights” and should be invested in “schools, healthcare, and other programs that help communities thrive.”

An open letter from elected officials from across the country, calling for the abolition of ICE

We are outraged at the recent actions of the administration, which have separated over 2,000 families who came to this country fleeing violence and seeking asylum, only to be detained and cruelly and capriciously separated. We fundamentally believe that our country can and should be a place where people seeking freedom and opportunity can find a home.

In the last two weeks, we have seen countless stories about babies and children being ripped from the arms of their mothers and fathers so that their parents can be funneled, without due process of law, through criminal prosecutions off of which private prison companies stand to make millions of dollars.

While this escalation of policy is particularly devastating and inhumane, it is part of a larger crisis that has been building in our communities for years. The rampant and brutal enforcement tactics of Immigration and Customs Enforcement (ICE) a lawless federal agency that, since its creation in 2002, has terrorized immigrants and separated families in the communities we live in and represent. As one of our newest federal agencies, ICE spends more time destroying communities than it does keeping communities safe while violating basic civil and human rights. The experiment that is ICE has failed, and must be ended as soon as possible.

As leaders and elected officials, we are committed to ensuring that our communities have the opportunity to thrive – that means everything from keeping our infrastructure up-to-date and creating good jobs to ensure that our kids get a quality education. Above all else, we are responsible for the safety of people in our communities. Our government should encourage civic and community participation and increase the quality of lives of our residents. The presence of ICE in our neighborhoods, schools, workplaces, places of worship, and homes, makes this impossible.

Now, more than ever, our country faces the greatest moral test of our time; we can choose to be complicit in this humanitarian crisis or we can step up and end family separation and mass incarceration. We join hundreds of thousands of Americans in calling on our federal government to immediately reunite all families who have been separated over the past two weeks, and to halt discretionless prosecutions for border crossing.

And we must go farther. We were heartened to hear last week’s announcement that Congressmember Mark Pocan plans to introduce legislation that goes farther, abolishing Immigration and Customs Enforcement (ICE). We applaud this development, and look forward to working with members of congress to bring an end to the fear and suffering that rampant immigration enforcement causes in our communities by defunding and disbanding ICE.