Op-Ed: Views expressed in this commentary are the author’s own. 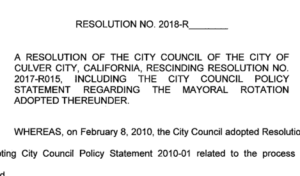 It’s been nearly two months since our new city council was sworn in and when the vice mayoral rotation turned out to be other than what some Culver City residents expected.  As I detailed in my last piece, the simple process of the new council voting for a vice mayor (who becomes mayor the following year), raised important concerns–not simply about the process–but more fundamentally, about the role of mayor, and whether a departing council should dictate how an incoming council should act.

This Monday, June 25, 2018, the council revisits the mayoral rotation policy, as stated during the newly assembled council’s first meeting. The agenda item includes three documents: a resolution to set the old policy aside, another resolution to rescind the policy and a response by the City Attorney to the allegation of a Brown Act violation regarding the action taken on April 30, 2018. Of the two resolutions, the city council is likely to adopt one or the other. If they do, the matter will be put to rest.

What the City Charter Says

Let’s focus on the issue, as it relates to the council as a whole. Here’s what our city charter says about the position of the Mayor:

Immediately following the certification of election results for any general or special municipal election at which Council Members are elected and at the second meeting in April in odd-numbered years, the City Council shall elect one of its members as its presiding officer, who shall have the title of Mayor and one of its members as Vice Mayor. Both shall serve at the pleasure of the City Council.

The Mayor shall have a voice and a vote in all City Council proceedings shall be the official head of the City for all ceremonial purposes and shall perform such other duties as may be prescribed by this Charter or as may be imposed by the City Council consistent with the office of Mayor. The Vice Mayor shall perform the duties of the Mayor during the absence or incapacity of the Mayor.

A Council Member who has held the office of Mayor or Vice Mayor for one year shall not be eligible for re-election to that same office until one year has elapsed.

As it relates to whether the City Council must follow a policy adopted by a previous City Council when conducting its election for Mayor, the City Charter simply states:

Except as otherwise provided in this Charter, actions of the City Council shall be decided by a majority of the members present and voting on a matter, excluding abstentions.

The last sentence is important because it establishes that, while previous policy can serve as guidance, the City Council simply needs a majority of members present to vote on any issue.

What Other Cities Do

It is natural that governing bodies, such as the city council and the school board set policy for a more orderly process, as Culver City’s former city council did. This study, prepared for the Santa Monica Council, included a review of the processes followed by other cities, showing wide variation.  Some cities have the voting public elect mayors, others specify the city council makes the appointment. Some cities that appoint a mayor, use a defined process; others apply a normative majority vote. Mayoral duties vary widely, some include ceremonial duties, others a “veto power,” the ability to sign warrants, etc. In the end, the study concludes all methods work, each with both advantages and disadvantages.

By rescinding or setting aside the policy, the city council re-affirms the direction that the charter sets: a simple majority vote was sufficient to elect Meghan Sahli-Wells as vice mayor.

There will be people who will claim this a terrible idea, that the policy resolution passed by the previous city council is essential.

However, there is no definitive policy resolution; in our town, the city charter has the final say. Many local governments elect a mayor and vice mayor through simple majority rule, as spelled out in the charter, without a guiding policy that mandates a rotation.

Who Can Speak For All Of Us

We should focus our attention on the role the mayor actually plays, as it is actually quite important to us, citizens. The mayor speaks on behalf of the council–and by definition–on behalf of us — whether speaking to reporters or at the many mayors’ conferences and meetings attended as representatives of our city.  For example, in his short tenure as mayor thus far, Thomas Small has been invited to three forums, the Chicago Forum on Global Cities, the U.S. Conference of Mayors, and the Yale Mayors Conference. At those events, our representative speaks and defends positions the city council has taken.

Earlier this week, I attended the meeting of the city council, when many longtime advocates celebrated a city council willing to listen to concerns for the safety of the entire community, over the interests of the Inglewood Oil Field operator.

The week prior, community advocates spoke to the police department at a meeting and invited public comment on the draft CCPD policy manual, regarding the work needed to effectively implement the council-approved Sanctuary City resolution.

These two issues, as well as others, will continue to matter to many: they both relate to how safe we each feel in our community. The test, as to who should be mayor and speak for our city, has to do with the passion expressed on these issues, and their actions to backup stated concerns. I support the city charter directive: the majority of the council consider and then vote on who is best suited to speak for them and for all of us, as mayor. Our votes and our laws entrusted them with decision-making authority, and we either trust them or elect others to fulfill this responsibility.

Tribute to the Stars — Dance Into The Night

The Art Walk and Roll Festival is Proof the Arts are Alive and Well...