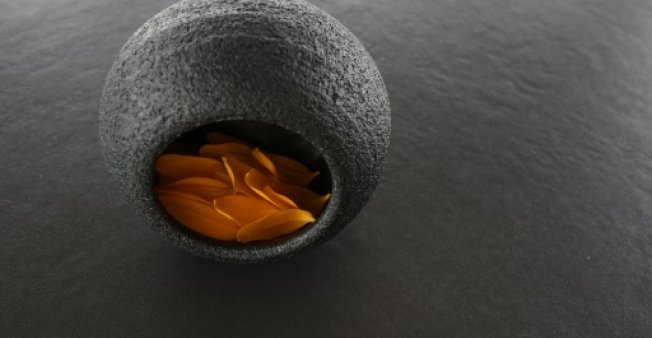 A dish of rice pudding and trout roe is displayed at the restaurant Vespertine in Culver City, California — part of a new generation of restaurants where the experience of eating is matched by an equally sumptuous feast for the other senses. – AFP photo

LOS ANGELES: At Vespertine, the last word in outlandish eating, staff are on a mission to “disrupt the course of the modern restaurant” as pioneers in the immersive culinary scene.

Something of an overnight sensation in southern California, the eatery was propelled to the top of Los Angeles Times critic Jonathan Gold’s prestigious annual rankings after its launch last year.

From the volcanic stone crockery and chefs’ aprons woven on a loom used for Samurai garments, to the attentive ballet of waiters dressed in monastic black, everything has been orchestrated to stimulate much more than the taste buds.

“We more or less created and synthesized a world that you’re stepping into,” says chef Jordan Kahn, hair swept into a raven black curtain on one side and shaved on the other.

“We want you to wander around and experience it however you want.”

In LA’s thriving foodie scene, Vespertine has emerged as part of a new generation of restaurants where the experience of eating is matched by an equally sumptuous feast for the other senses.

Dialogue, a tasting menu restaurant in nearby Santa Monica, promises an experience “playing on the senses and emotions” while adventurous diners in Beverly Hills can try Somni, Catalan for “dream.”

Even old hands like Austrian celebrity chef Wolfgang Puck, the head of a gastronomic empire, are getting in on this high-concept culinary high-wire act.

His The Rogue Experience — an eight-seat counter in West Hollywood where the tasting menu changes periodically — aims to “challenge expectation and push the boundaries for the future of food.”

Vespertine’s Kahn says he was inspired to open up shop when he happened upon an odd glass building in west Los Angeles with an exoskeleton of oxidized metal that has become known as “The Waffle.”

He contacted the architect to propose opening a restaurant where the objets d’art would serve as the inspiration for the cuisine, rather than the other way around.

A meal at Vespertine is a four-act drama that begins with the welcome in a half-Bauhaus, half-Japanese garden, where customers are offered a glass of champagne.

Kahn greets diners in a kitchen worthy of an interior decorating magazine and they are then escorted to the open-air lounge on the top floor.

There, customers enjoy a sparkling wine aperitif infused with Californian pine spines and topped with an exotic flower, seaweed chips and a biscuit of burnt onions and blackcurrant.

In the dining room, guests taste 15 dishes. Kahn says his work is influenced by the molecular gastronomy of Spanish chef Ferran Adria and the avant-garde Chicago restaurant Alinea, where he cut his teeth.

The menu includes scallops with marrow and slices of white asparagus and a rice pudding with trout eggs and sunflower petals.

Dessert is marshmallows sprayed with a buckwheat cream, jasmine sprouts, rhubarb and a carrot confit with blackcurrant coulis. Everything is washed down with biodynamic wines or kombucha cocktails.

Navigating the plate can be a game of hide and seek, with diners required to lift leaves or flowers to find the turbot or turkey underneath, plunging the fork blindly into bowls that are partly closed over.

Vespertine prides itself on paying close attention to each diner, says Kahn, who encourages his waiters to notice guests’ eating habits, their dominant hand, mood, desire to converse and so on.

Proponents lap up the eccentricity of the immersive dining scene, but detractors are put off by what they see as the pretentious atmosphere, a tendency for over-sweet cuisine, and the exorbitant prices — up to $400 per head in LA.

Ultraviolet in Shanghai outdoes even the wackiest LA restaurant with its 360-degree videos and music piped into the dining room along with aromas for the guests to appreciate.

Spain’s El Celler de Can Roca, named best restaurant in the world in several surveys, dazzled with its El Somni banquet, a culinary “opera” on a round table surrounded by a spherical theater screen.

Heston Blumenthal’s The Fat Duck, in southern England, offers diners Sound of the Sea, a seafood dish served with an iPod that provides a soundtrack of crashing waves as they eat.

Food can appear to take a back seat amid all this ostentation, but Kahn insists that the dining experience is about more than what’s on the plate.

“Out of 20 courses over six months, do you remember any of the dishes that you had?” he asks, although he’s being rhetorical.

“Maybe one or two and, at the end of the day, how important was the food? The important thing was the connection that you felt, and that’s long-lasting.” – AFP