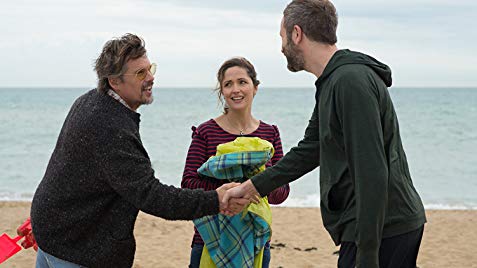 If there’s one thing that U.K. novelist Nick Hornby knows, it’s all-encompassing obsessiveness. The most recent of his books to be turned into a film is “Juliet, Naked.”

Both novel and movie cover the lamentations of Annie (Rose Byrne), a young woman whose decade-long relationship with Duncan (Chris O’Dowd) has long been tainted by her partner’s obsession with a cult-favorite American musician Tucker Crowe (Ethan Hawke), whose brief encounter with fame lasted only a single album release.

In fact, here’s some trivia for you–“High Fidelity” was also actually made into a Broadway musical (2006), but had an unfortunate meager 10-day run. Each film (and preceding novel) dealt with the effect of–respectively–the obsessiveness of the record-collector mentality, and the avid fan of football (that’s soccer, to you Yanks), on a romantic relationship.

“High Fidelity” provided resonance for many a baby boomer who endured complicated systems of archiving vinyl and naming little-known “B” sides of 45s (also see: Barry Levinson’s “Diner” for reference).

The entertaining Hornby adaptation–which starred John Cusack and Iben Hjejle, and maybe the film that really introduced Jack Black to movie audiences. And while there’s been a resurgence of vinyl, it’s more than likely a novelty and Gen X and Millennials may find relating to it a challenge. They certainly wouldn’t understand the issue of all the space vinyl collectors needed, given that a similarly sized music collection will fit on a smartphone.

Forgive the two paragraph digression, but there is relevance: in “Juliet, Naked,” the male character’s obsession is with a musician. Because Crowe has no Internet presence or new releases, Duncan’s forced to chat with a small, but worldwide, group of men who share his fancy — they dissect every aspect, ever bootleg release of his music.

And, because no one essentially knows “what happened” to the elusive singer/songwriter, this fevered group of fans have wildly speculated about what has happened to him. As it’s revealed later, much of what was rumored isn’t true.

After Annie writes a scathing review (on Duncan’s site, of course) of a CD of Crowe’s pre-produced album, Crowe sends her an email and the two begin a friendly and chatty correspondence. As Annie, Duncan and the audience finally find out what’s happened to Crowe, the movie offers up a film about relationships — romantic and platonic, hetero and homosexual, siblings half and whole, and the dynamics and politics involved in each.

The performances are charming and the four writers credited with the screenplay do an excellent job of adapting Hornby’s novel. There are some seriously significant changes, but definitely for the better, in terms of tone and appropriateness for film.

The movie makes for a more engaging storyline and likable, albeit flawed characters. It won’t go unnoticed that the most admired character in the story is the most problematic — and yet Hawke (basically playing a version of Jesse from Richard Linklater’s trilogy) makes him endearing.

A mature woman may look at Tucker Crowe (and his five children from four relationships) with a jaundiced eye, but director Jesse Peretz makes the movie Tucker credible as a romantic lead.  From the first minute of the film (and trailer), it’s obvious what’s going to happen, and an audience who’ve gone to enjoy a fun romantic comedy, won’t be disappointed.