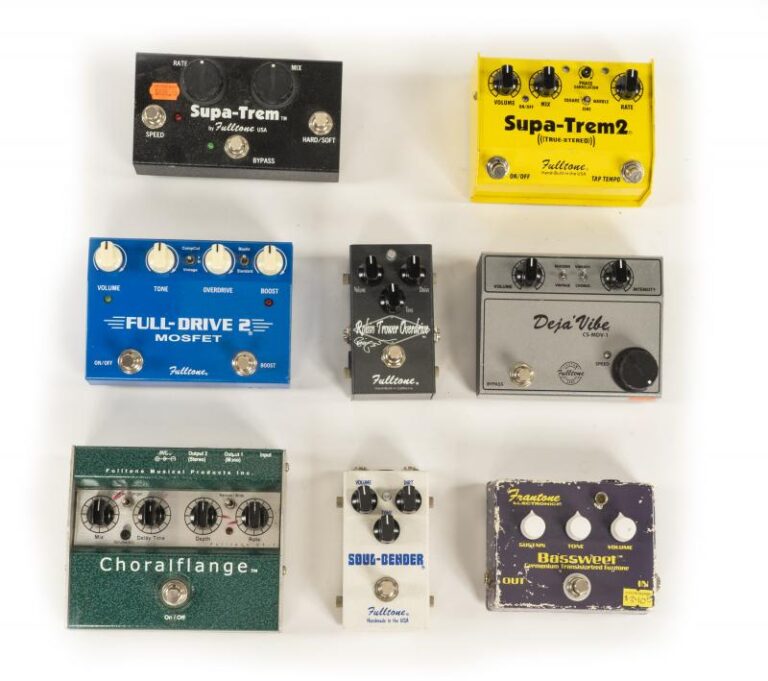 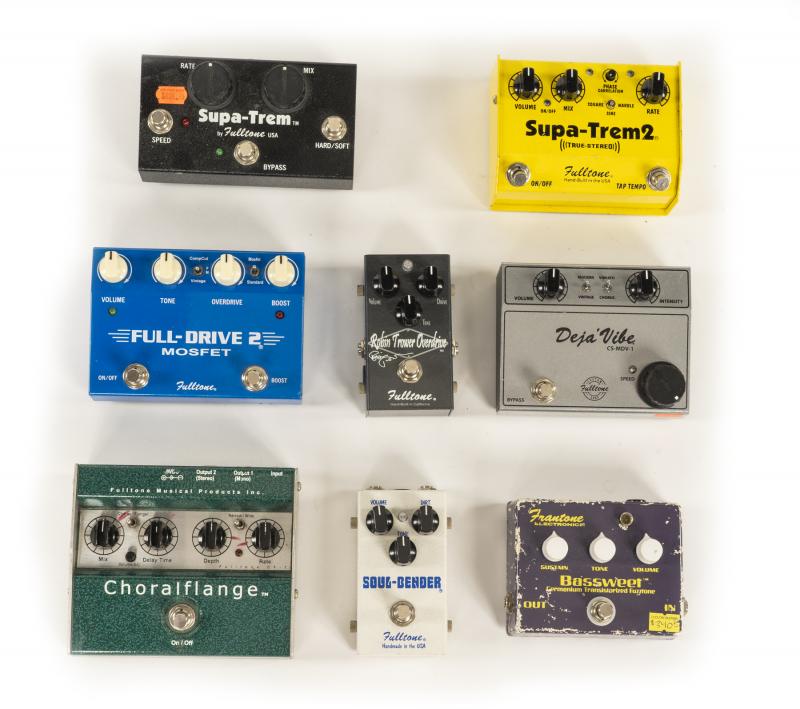 Many are unaware of the often impractical or even dangerous physical means musicians originally used to create memorable sound effects.

Guitarists such as Link Wray and Dave Davies loosened tubes in their amps and even slashed their speakers to produce distortion.

An effect called “flanging” that can be described as a psychedelic woosh was originally created by playing two reel-to-reel tape copies of the same track while simultaneously pressing on the rim (or “flange”) of one tape reel to move it slightly out of synch. This effect is featured on The Beatles’ “Tomorrow Never Knows” and Jimi Hendrix’s “Axis Bold as Love.”

Effects pedals like those made by Fulltone first came on the market in  the 1960s, offering a sturdy and portable way to bring these sounds to the stage. Foot controls meant a player could change tone while using both hands to play.  Players like Hendrix and Jeff Beck ordered custom gadgets,  but they were also increasingly mass-produced and marketed, with Gibson’s 1962 Maestro Fuzz-Tone an early landmark.

In the 1970s, as rock became a bigger business, and electric guitars a larger segment of the musical instrument market, pedals became more affordable and reliable, perhaps reaching their apex in the rainbow-colored Boss line.

The advent of digital technology in the 1980s was not kind to guitar tone. Digital simulations of analog sounds were too often thin and predictable. However, a return to the eccentric craftsmanship and creativity of the 1960s followed this era which was almost parallel to the vinyl revival and interest in artisanal food, drink, etc.

Fulltone emerged as one of the first and most respected “boutique” pedal makers, updating classic designs with top quality components and introducing new products inspired by classic rock tones.

Santa Monica’s Truetone Music is the best place on the Westside to shop for vintage and boutique pedals, but even corporate behemoths such as Guitar Center have caught on.

At the same time that Fulltone built a reputation for excellent products, its founder/owner/namesake Michael Fuller developed one for difficulty. He seems to be as demanding of his customers as of his products. Guitarist chat boards are full of negative stories.

A significant section of the Frequently Asked Questions part of Fulltone’s website is devoted to discouraging people from buying the Tube Tape Echo because Fuller does not want to hear questions and complaints about this complex retro tone machine.

However, for most users the quality of Fulltone’s pedals more than balanced this out, until a few weeks ago. On June 2, Fuller posted on Facebook, in reaction to the protests against racism and police violence: “What is this like night 4 of looting with 100% impunity? The pussy Mayor and Governor don’t give a shit about small businesses, and it’s never been more clear.”

When challenged he responded, “Ahh I feel better, and flushed out some prissy boys who were raised to pee sitting down. Now I’ll delete.” He got rid of both comments, but the story was covered by music sites including Billboard, Pitchfork, Loudwire, Guitar.com, Guitar World, and the New Musical Express.

Fuller’s further responses on this issue went viral, especially the line “I am begging you to sell your pedals because you actually don’t deserve them.” Musicians Jason Isbell, Mark Hoppus of Blink 182, and the Indigo Girls declared that they would stop using Fulltone pedals and Guitar Center and online music gear marketplace Reverb both announced they would stop carrying them.

Fuller has since released an apology, attributing his remarks to pandemic-related stress. He stated, “I apologize to anybody I’ve offended, and believe that anyone who abuses or harms another person should be prosecuted to the fullest extent of the law, that includes cops, and I shouldn’t speak to this subject any more unless I’m out there doing something positive, which is not the case right now.”