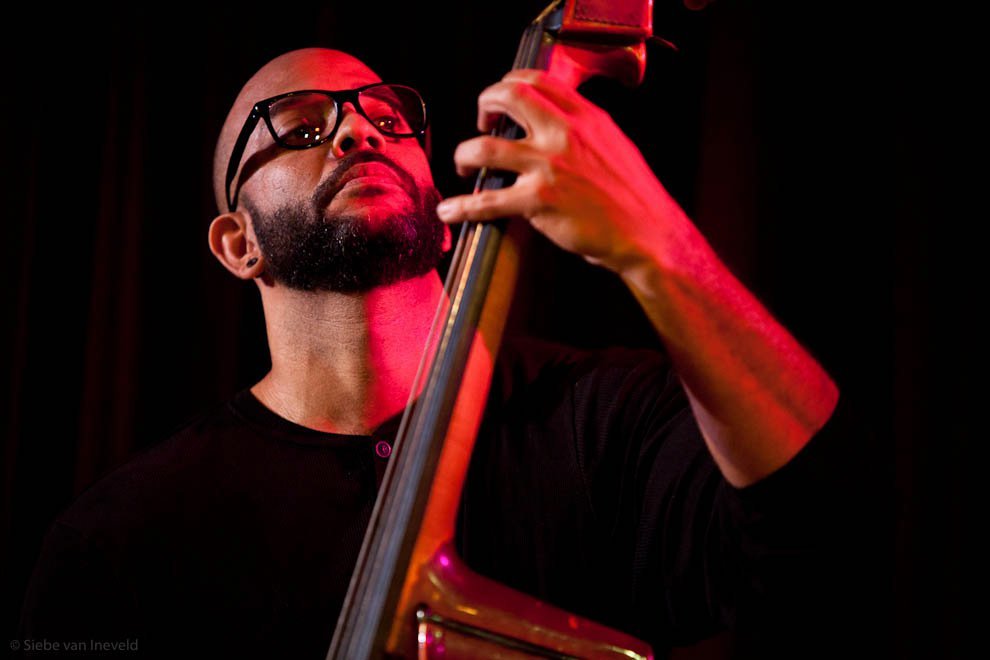 As a jazz bassist, I visited Eric Revis’ Facebook page and was startled to see he lived in Culver City.* Did one of the top players of my generation, who’s toured with jazz greats ranging from mainstream standard bearer Branford Marsalis to German free player Peter Brotzmann, really live in my hometown, and was he going to take all my gigs?

To answer these and many other questions, I arranged a time to meet with Eric at the Culver Center Coffee Bean. Despite social media’s negative effects on politics, privacy, and other aspects of civilization, it also enables small groups of people to network around shared interests.

Born in Los Angeles, Revis grew up primarily in Fresno, California and San Antonio, Texas. He began playing bass guitar in his teens, inspired by the 1960s and 1970s R&B albums he often heard at home. He soon had a hotel gig on San Antonio’s Riverwalk, and covered rock, pop, and country hits for Texans and tourists. Meanwhile, the band’s keyboardist loaned him records, introducing him to classic Blue Note jazz and the experimental work of Cecil Taylor and Sun Ra.

As a volunteer for a local arts program, Revis met trombonist Delfeayo Marsalis, a brother of the better-known Wynton and Branford, who encouraged Revis to attend the University of New Orleans, where his father Ellis Marsalis taught. Revis thrived under what he calls Ellis’ “Socratic approach,” in which any question would be answered with a question, guiding students to find their own solutions to creative problems, instead of supplying formulas. In New Orleans, Revis performed often with rising and established jazz stars including Nicholas Payton and Dr. Michael White and learned to fill rooms with the sound of an unamplified string bass.

After graduation, Revis applied to singer Betty Carter’s Jazz Ahead program, which brings young musicians to New York for an immersive experience. He was admitted, completed the program, joined Carter’s band, and settled in New York. Carter was well known as a mentor to young musicians, but also as a demanding boss.

”Betty was a consummate musician and teacher, both on and off the bandstand,” Revis says. “To this day there are things she imparted to me that I still think of and use quite often. I am truly grateful to have had the opportunity to work with her.”

After touring with Carter, he was admitted to the higher echelons of the New York’s jazz scene, performing with legends Lionel Hampton, Billy Harper, and Elvin Jones, as well as continuing a relationship with the Marsalis’ family. In 1997, he appeared on Music Evolution, the second album by Branford Marsalis’ hip-hop project Buckshot LeFonque, beginning an ongoing collaboration.

After 13 years in New York, Revis retraced his journey, moving, he says, for family reasons. He first moved to Texas, then to Los Angeles, settling in Culver City. I wondered if the moves adversely affected his career, and he says,  “Not really. I had put in time in NYC to establish myself. I developed a number of great relationships with a lot of musicians. My last few years in New York were spent traveling. I would see guys that lived around the corner from me more on the road than in the neighborhood, so actually being in NYC wasn’t as much of a necessity.”

With album sales crushed by downloading and streaming, many artists need to constantly tour to survive, so, he asserts, New York has become less important as a base for musicians. Branford Marsalis and his pianist Joey Calderazzo both now live in North Carolina, while drummer Justin Faulkner resides in Philadelphia. It is possible to live in Culver City when your career is on the road.

The quartet Revis led on April 29, 2018, at the Sam First lounge by LAX included two players who had made their mark elsewhere, before coming to Los Angeles. Guitarist Jeff Parker of Tortoise and the Association for the Advancement of Creative Musicians moved to Los Angeles from Chicago to support his wife’s career, drummer Guillermo Brown came from New York to join the band for the “Late Late Show with James Corden,” while pianist Joshua White is based in San Diego. The band played a complex, almost-entirely improvised set, with repeated bass riffs supplying structure. They concluded with the jam-session warhorse “Blue Monk.” Similarly, he has been playing with bicoastal saxophonist/composer David Binney, alongside lifelong westsider Alex Cline on drums. These migrants have not come to take our jobs, but to elevate the scene through collaboration.

In June, Revis will spend a week in Australia with Branford Marsalis, recording a new album between concerts, before he returns to Los Angeles, to lead at the Blue Whale in Little Tokyo on June 28, 2018, with the all-star quartet from his latest CD Sing Me Some Cry: Ken Vandermark (saxophone, Chicago), Kris Davis (piano, New York), and Chad Taylor (drums, Philadelphia).

The Culver City Catalyst features people and businesses that add to Culver City’s richness and vitality. Know a person or business like this? Email profiles@culvercitycatalyst.co