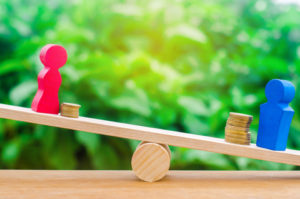 The rich have gotten richer. Good for them and bad for everyone else.

On my morning commute the other day, I stopped at a new cafe I had been meaning to try. I ordered a small coffee and a croissant, for $8. As I walked back to my car, and the embarrassment of how much I’d just spent wore off, I wondered two things: Why was something that should cost a few dollars so expensive?

If you think a focus on the bottom fourth of workers is too extreme, consider the worker at the 50th percentile – meaning half of all workers make less than her, and half make more. Wages for this “median” worker were $18.28. Working full-time, year-round at this wage gives you a yearly salary of about $37,000.

How it is possible that such low wages, for half of the country, co-exist with $8 coffees and croissants and $2 million homes? The answer is: top earners have done really well over the past several decades, even though most other workers have not. As you’ve probably read, inequality in the U.S. has reached levels that have not been seen since the Gilded Age.

It starts with wages. The figure shows trends in hourly wages over time, for three percentiles, the 20th, 50th, and 90th. Think of it as ranking 10 people by their wages, with the top earner as “10.” 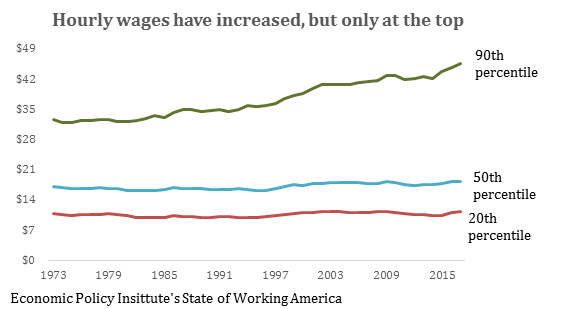 What’s behind these trends?

Technological advances have increased demand for higher-skilled workers, driving up wages at the top while pushing down wages at the bottom. Technology has also started to replace some of the jobs at the lower end, especially those that involve easily automated tasks. The number of workers covered by unions has also fallen over time, limiting their ability to negotiate pay.

The more recent rise of the gig economy – think Lyft, Uber, Postmates — has also kept wages down at the lower end — This means more and more workers are independent contractors, without the benefits of being a regular employee, such as health care and paid sick days.

These trends are not likely to reverse any time soon, as technology marches forward, and we all end up in self-driving cars. In fact, there’s been much debate about whether the ongoing advances in technology and artificial intelligence will mean the end of most jobs.

What seems more likely, and what has already happened, is the end of certain types of jobs. What remains will be highly skilled jobs that manage and create this technology, and the lower- skilled jobs that can’t be done by robots.

Among the 10 occupations projected to add the most jobs to the economy over the next 10 years, five of them are in this category (home health aides, food-service workers, personal-care aides, janitors, and basic laborers) and those jobs pay less than $30,000 per year.

Ok, you say, but what about family income? A lot of these low-wage workers are not the home’s sole breadwinner. That’s true. But trends in family income inequality are the same. 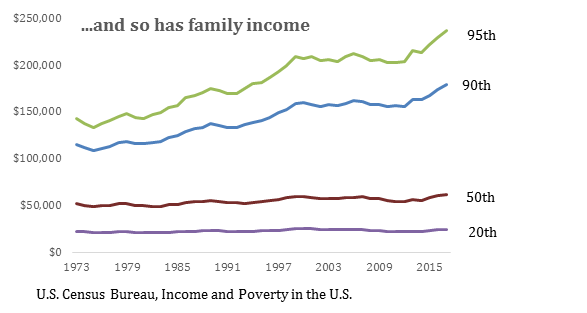 Now go to 2017. Income for the 50th percentile household was $62,000 and income at the top was $237,000. Higher-income families are much better off than they were 40 years ago, while families in the bottom half of the country are not.

Trends in earnings and income have also contributed to a large disparity in wealth. Wealth, or net worth, is total assets minus debts, so it includes items such as bank accounts, stocks, bonds, retirement accounts, real estate, and cars.

Fast forward to 2016, where the top 1% is worth more than $10 million, and the 50th percentile household is valued at less than $100,000. Equally concerning is the fact that one-in-four families today have less than $5,000 in wealth. Lack of savings makes it hard to cover an unexpected expense, like a medical bill or a car-repair bill, but it also makes it hard to send children to college or to afford retirement.

What’s wrong with some inequality, as long as we can ensure the people at the bottom aren’t poor? Well, one issue with inequality is that the super-rich control the political agenda, given campaign finance rules that allow unlimited contributions.

Any public policies coming down the pipeline are unlikely to cater to the poor or even to the middle class. Even if the rich did decide somehow to support anti-poverty policies, there are still several downsides to having such extreme inequality in society.

The economist Robert Frank argues that a growing disparity between the top and the bottom hurts everyone who is not positioned at the top, “Rising inequality has driven many of the 99% into a financial ditch.” He focuses on what he calls “expenditure cascades.”

The effect is to shift the frame of reference for what is acceptable and necessary and make it harder and harder for middle-class families to make ends meet. Ok, so maybe middle-class families don’t need to spend more on birthday parties or own a boat. But expenditures cascades have put pressure on basic needs too.

As Frank states, higher spending on housing by top earners has shifted the frame-of-reference. Because of this expenditure cascade, the median new house in the United States is now 50% larger than in 1980, even though median income has grown very little. As a result, the average middle-income household spends about 35% of its budget on housing, which includes rent for renters.

That number is even higher for poor families. Studies find that low-income families often have to make harsh trade-offs in spending. As an example, in cold parts of the country they tend to spend less on food during the winter to offset rising utility costs. Both adults and children eat less.

One option is to move to an area with cheaper housing. But this move has at least two downsides. First, it increases commute times. Frank finds that in cities with higher inequality, the average resident tends to have a longer commute into work. Second, it would most likely reduce the quality of the school your child attends. Public school quality is closely linked to property taxes brought in, which in turn depends on home values.

Beyond expenditure cascades, another issue with extreme inequality is that rich people drive up house prices in areas where they want to live. Many cities, L.A. included, attract a lot of high-income, well-educated, often younger professionals, who can afford to buy expensive homes or pay astronomical rents.

What to do (And why we can afford it)

Income redistribution is never a popular topic, but most of the proposals for dealing with this issue cost money that has to come from somewhere.

The Earned Income Tax Credit (EITC) is another powerful policy that gives money back at tax time to low-income workers. Under current rules, a single mother with two kids, for example, could get up to $5,700 from the EITC. But she gets that maximum amount if she earns less than $18,000. So it’s not really enough.

Representative Ro Khanna (from Northern California) has proposed a major expansion to the credit, which would give that single mother up to $11,000 at tax time and provide some benefits to middle-class workers.

Senator Corey Booker (D-NJ), in an effort to close the wealth gap, recently proposed giving every child born in the U.S. a savings account with $1,000. The money would be deposited every year into that account (with lower-income families getting more), until the child turns 18, upon which she can use the money only for approved purposes.

Each of these proposals costs money and some cost a lot of money – close to $140 billion per year. But it’s important to keep the costs in perspective. Another big government program is the mortgage interest deduction, where homeowners can deduct mortgage interest payments from taxable income.

That program costs the government over $70 billion per year in lost revenues, but its benefits go mostly to higher income homeowners. Or consider the income tax. As Robert Frank points out, the top 10% of households currently pay an average federal income tax rate of 21%. An increase of just one percentage point would raise $45 billion every year.

It’s encouraging that policies are being proposed to help lower- and middle-income families, even with their high price tag. Now, as with the $8 coffee and pastry, it’s just a question of convincing higher income families that they can afford it too.