Precedents, Politics and Personality. A brief history of the mayoral succession and a proposed charter amendment to abate controversy. 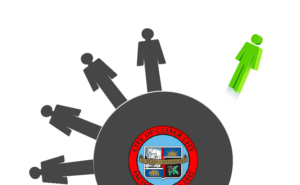 It was easy to assume the large crowd gathered at the the April 30, 2018 Culver City City Council meeting was there to commemorate the end of the terms for Mayor Jeff Cooper and Councilmember Jim Clarke, who were termed out, and to welcome the incoming new Councilmembers, Alex Fisch and Daniel Lee. Or perhaps they were there to witness the historic induction of Culver City’s first African-American councilmember (Lee). When the meeting erupted into disappointment, anger, and name-calling, however, it shocked many attendees, and sharply contrasted with the evening’s theme of “unity.”

The ire was over the rumored selection of Meghan Sahli-Wells for vice mayor over council member Goran Eriksson, and, was further stoked by at least one (very vocal) non-resident agitator. In a perfect world, one would hope that personality and politics would be kept out of the selection of mayor and vice mayor (a choice made by council members).  Such idealistic hopes were dashed on April 30 because membership to the city council is, after all, a political position, councilmembers are human, and the city charter gives unfettered discretion to the city council to select and remove the mayor and vice mayor. (See Section 606 of the City Charter which states that “[b]oth shall serve at the pleasure of the city council”).

In an apparent effort to avoid “politics and personality” issues, the city council adopted a policy in 2010, and amended it in 2017, which provided for a rotational selection of council members to the positions of mayor and vice mayor.  Currently, the city council designates a one-year term for mayor and vice mayor.  Five council members and four-year council terms, however, render it mathematically impossible for complete equity. Anyone elected to the city council cannot be treated precisely the same, regardless of whether the policy is observed or not.  Inevitably, at least one of the five council members will “lose out” on becoming mayor in any four-year term.

Further, although the rotational succession is a policy adopted by the city council, any such policy is still, legally, trumped by the city charter’s provision of unfettered discretion in the appointment and removal of the mayor and vice mayor, rendering any such policy purely advisory.  Although this rotational policy has effectively been in place since 2010, it has no legal force, which explains why no efforts have been made to enforce the policy.

To better understand positions on either side of the controversy, research was conducted to  determine when and how this rotational policy was followed or not.

A chronological look at the recent history (2010 to present) of the rotational policy, and how it was, or was not, followed

Policy could not be followed as written because Malsin resigned.  With such resignation, following the spirit of the policy, Cooper should have been made mayor and Meghan Sahli-Wells vice mayor as neither had yet served in those positions, and Cooper had seniority, whereas Andrew Weissman had previously already served as mayor.

Policy was not followed. Mehaul O’Leary should not have been vice mayor according to the policy, it should have been Clarke.

Policy was not followed. Clarke should not have been mayor, according to a strict reading of the policy, because he was not previously vice mayor. Clarke was properly mayor according to the spirit of the policy, due to Weissman being termed out and Clarke not previously having served as mayor, however, had the policy been followed, strict or not, Small should have been vice-mayor, not Cooper.  If the policy had been correctly followed in the previous cycles, however, Clarke would have already been mayor in the previous year, leaving the mayorship without a designated replacement under the policy due to Weissman and O’Leary both being termed out. The most likely mayor should have been Cooper or Sahli-Wells, but in either case, Small should have been vice mayor.

Thus, since its enactment, had it been strictly followed, eight positions (including the current selection), were filled contrary to policy.  In fact, from the above history, the actual “policy” most followed since 2010 was that council members were selected mayor or vice mayor in their last two years in office, regardless of the rotation policy (Armenta, Weissman, O’Leary, Clarke, Cooper, and now Sahli-Wells).  As the history demonstrates, the 2010 rotational policy was observed more in the breach.

To avoid controversy in the future, the city can enact a Charter amendment reducing the mayoral and vice mayoral term so that each council member can be both during each four-year term, eliminating the current discretion given to the council, and replacing that discretion with a mandatory rotational system.

What follows is a rough-draft proposal for a charter amendment to avoid appointment controversy. It gives all five councilmembers an even amount of time during each four-year tenure to be vice mayor once and mayor once. For individuals who are re-elected to a second term, they will be vice mayor and mayor for a second time.

Each mayoral and vice mayoral term shall be 292 days long, except in a leap-year, when the term spanning February 29 shall be 293 days long.

Beginning with the next regular election for City Council in 2020 [which is for the three member election cycle], and forever afterwards, the mayoral and vice-mayoral rotation shall take place as outlined below.

Given the three-member/two-member cycle of election of councilmembers, for purposes of this provision, the following definitions shall apply:

The Councilmember labeled as A shall be the individual in the two-member election cycle who received the most votes during that election.

The Councilmember labeled as B shall be the individual in the two-member election cycle who received the second most votes during that election.

The Councilmember labeled as C shall be the individual in the three-member election cycle who received the most votes during that election.

The Councilmember labeled as D shall be the individual in the three-member election cycle who received the second most votes during that election.

The Councilmember labeled as E shall be the individual in the three-member election cycle who received the third most votes during that election.

In the case of the mid-term departure of a council member and a special election, the individual replacing the departing council member shall take over the exact position in the cycle of the person who he/she is replacing, regardless of the new council member’s status or vote count.

Mayoral and vice mayoral terms shall rotate over a period of four years as follows:

Term 1 appoints A as Mayor & B as Vice-Mayor.

Term 2 appoints B as Mayor & C as Vice-Mayor.

Term 5 appoints E as Mayor & A as Vice-Mayor.

The rotation shall repeat after that point, starting with Term 1.

No exception shall be made to the appointments provided for above except in the exceptional circumstance where a council member is unable to serve as mayor or vice mayor due to, for example, a disability, preventing him or her from carrying out his or her duties. Only a finding and vote by a unanimous city council that such an exceptional circumstance exists will allow the council to appoint a different council member to fill the role. The selection of a replacement shall only be made, however, through a unanimous vote of the council. Any such exceptional appointment shall not change any other current or future appointment per the rotation schedule.

While seemingly complicated, the proposed amendment provides the most equity in a clear and concise way, would eliminate the personality and politics from the selection of mayor and vice mayor.

Behram Parekh is an attorney with over 22 years of experience litigating complex fraud cases against multinational corporations. He and his family have been Culver City residents since 2009.