On the surface, what characterizes the counterculture in Communist countries is not the same in the United States. But throughout the 20th century and especially during the Cold War, political posters and salvaged scrapbooks have been subtly sending silent signals that many people have secretly shared Western freedom-based ideologies from beyond the Iron Curtain. We just haven’t been able to see examples of any of it before now, but the Wende Museum of the Cold War is changing that with two new exhibitions: Promote, Tolerate, Ban: Art and Culture in Cold War Hungary and Socialist Flower Power: Soviet Hippie Culture.

The unique museum came about in 2002, when L.A. native and Modern European historian Justinian Jampol needed a place for his expanding collection of relics rescued from unraveling socialist regimes. He’s since drawn upon and developed the collection to visually illustrate what Eastern Europe was like before the fall of the Berlin Wall and the breakup of the Balkans threatened to erase communist culture entirely. And thankfully, in November, the Culver City–based Wende Museum relocated to a much bigger and more museum-friendly space, where it continues to seek out, preserve and present art, artifacts and ephemera from the Cold War — ironically, in a former armory. 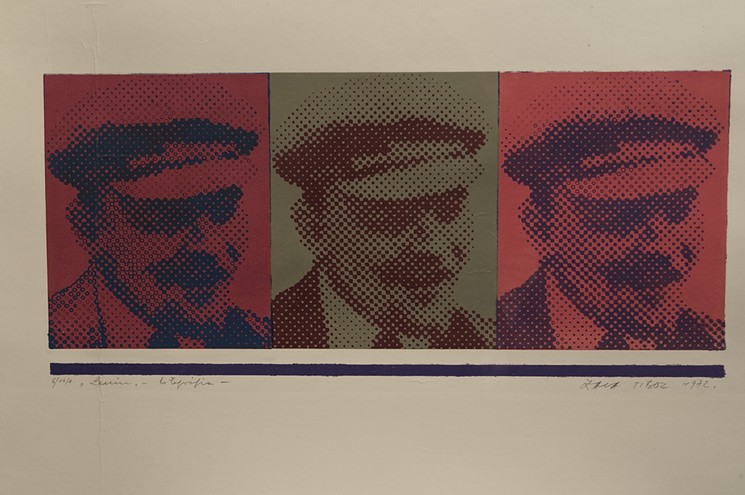 Promote, Tolerate, Ban is a joint effort between the museum and the Getty Research Institute. In 2010, the GRI acquired 600 cultural artifacts that belonged to photo enthusiast Michael Simon, an immigrant from Hungary who came to the United States in 1957. At the same time, the Wende Museum embarked on its own quest to acquire a variety of state-approved yet cunningly coded visual art produced under communism in Hungary, spanning the tail end of World War II to the late ’80s. The result is a little confounding, with the films and photographs of daily Hungarian life somehow an eerie visual echo of the way artists, writers, photographers and filmmakers have deftly conveyed idealistic messages under the radar of an authoritarian system. It’s as oppressive in mood as it is in subject matter, with a lot of shiny dictator sculptures and commercial-style graphic posters that are disturbingly yet deliberately brandless. It’s kind of like a midcentury snippet of the ongoing ideological undercurrents bubbling beneath the surface of communism in Eastern Europe at the time. 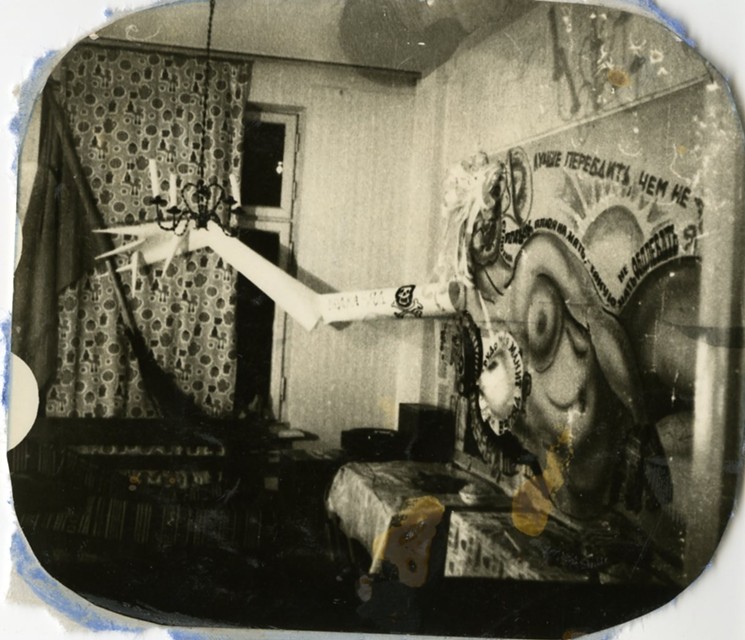 Moscow hippie apartment interior with a wall-sized picture of a naked woman with extended cardboard arm, 1975

The Wende Museum of the Cold War

Speaking of bubbles, the exhibit flows into Socialist Flower Power, which occupies a much smaller yet more fascinating space filled with all kinds of documentation related to Soviet hippie culture — culminating with an actual black-light “bubble bunker” complete with rudimentarily painted countercultural glyphs and a two-panel Eastern Orthodox icon, because under atheist-based Soviet communism, anything religious was by nature transgressive — not like in the United States. (At least not in theory.)

Another way hippies in the Soviet Union differed from their American counterparts is reflected in the price of denim jeans, which cost the average Soviet about $1,000. Yet another distinction is demonstrated in their choice of drugs: While the U.S. smoked marijuana and dropped acid, Soviet hippies fell into the country’s seemingly boundless poppy fields, going straight to heroin. You can’t blame them: Stepping outside with long hair could land a man in a Soviet mental institution, which were essentially prisons for free thinkers. 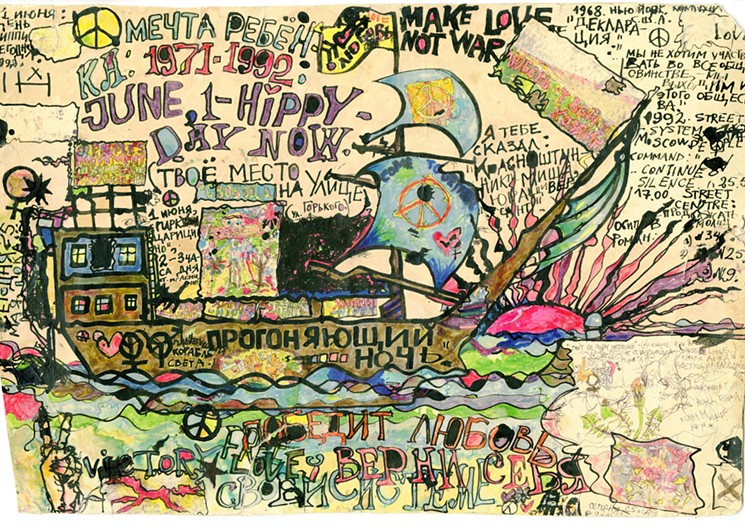 The Wende Museum of the Cold War

In the end, though, the Soviet hippie sentiment shines through and even reflects the core meaning of the word “counterculture” itself, which is not restricted by geographical boundaries but by the imagination. In the words of a Moscow guru in the exhibition publication, “Cool clothes embroidered with hallucinatory plants and insects. Surrealist frescoes and collages in underground apartments. Fragments of film without beginning or end. … Psychedelic paintings in notebooks and exhibitions. Peace signs painted in doorways. telephone boxes and lifts. All kinds of jewelry, amulets and talismans. Anonymous flyers passed from hand to hand. Legends and tales, disseminated orally. … The wonderful slang of the urban underground. The tireless hitchhiking. … Long meditations high in the mountains and in deserted metro stations.”

Sounds a lot like the 1960s here in the United States.

Tanja M. Laden is a native Angeleno who writes about arts, culture, technology and travel.