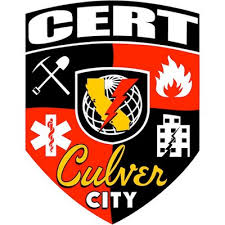 In a disaster, we depend on first responders: fire departments, police, FEMA, the National Guard, and other military, but community volunteers can provide vital support when first responders are overwhelmed. Untrained helpers, however, risk becoming victims themselves. Fortunately, Citizens Emergency Response Team (CERT) training is available, for free, in Culver City.

In 1985, the Los Angeles Fire Department developed and implemented the first official CERT.  In 1993, FEMA made CERT training available nationally. Communities can tailor the training and drills for specific risks, culture, and needs. CERT training is available in 28 states and Puerto Rico.

Culver City’s Fire Department (CCFD) created its own CERT in 1997. Volunteers were trained to train other volunteers in coordination with FEMA. Culver City CERT now trains responders, helps prepare for a disaster, assists the city in a disaster, and educates the community.

On Thursday night, 2 August 2018, Culver City CERT had its annual picnic at Veterans Auditorium with approximately 40 attendees. CERT Board President Joel Falter announced that a CERT review class in June had been well-attended, both CERT and Culver City Amateur Radio Emergency Services (CCARES—CERT’s ham radio operator division), were at Fiesta La Ballona from 24 to 26 August 2018.

In October, CERT will conduct a citywide disaster drill.

CCFD Chief Roger Braum expressed the deep appreciation he and his fellow firefighters have for CERT’s support. He also gave an update on the CCFD strike team which had gone to Northern California to assist with quelling a wildfire about an hour outside San Francisco. Braum said it would take 36 hours to drive the fire engines home.

President Falter and CERT Board Member Stephanie Benjamin reported on the California CERT response workshop they attended 17 April 2018, where representatives of the Los Angeles and Long Beach Fire Departments described how CERT members contribute to their operations. These departments have started training CERT members to handle administrative and other roles in emergencies when fire department personnel are needed in the field. Also, L.A. County is interested in establishing mutual aid between area CERT groups.

Falter encouraged community members to get involved with CERT to “give something to the community,” adding: “CERT’s primary objective is assisting the community in times of emergency… The focus has been on earthquakes, but now we are seeing fires and other extreme disasters in places that were not considered at risk for these kinds of disasters.”

CERT training is free. Culver City residents have priority, but non-residents are welcome if space is available. The next session, starting 16 October 2018, is full. Registration for Spring 2019 will open soon.

Participants get hands-on experience with moving and carrying victims, basic first aid, assessing victims for injuries, setting up medical operations centers, moving large objects using leverage and cribbing, putting out small fires, connecting and using a fire hose, and evaluating a building after an earthquake, among other things.

Classes are at the Fire Department Training Facility on Jefferson Blvd, and firefighters help with training when available. There is a drill on the last day of class where students roleplay victims and rescuers to practice their new skills.

The first class is on a Tuesday night from 7 p.m. to 10 p.m., followed by several Saturday sessions from 9 a.m. to 4:30 p.m. Members can also train as ham radio operators, obtain a FCC amateur radio license, and join CCARES which maintains the ham radios in CERT vehicles and our City Emergency Operations Center. CCARES/CERT members operate Emergency Communication (E-COMM) during Drills and Emergencies.