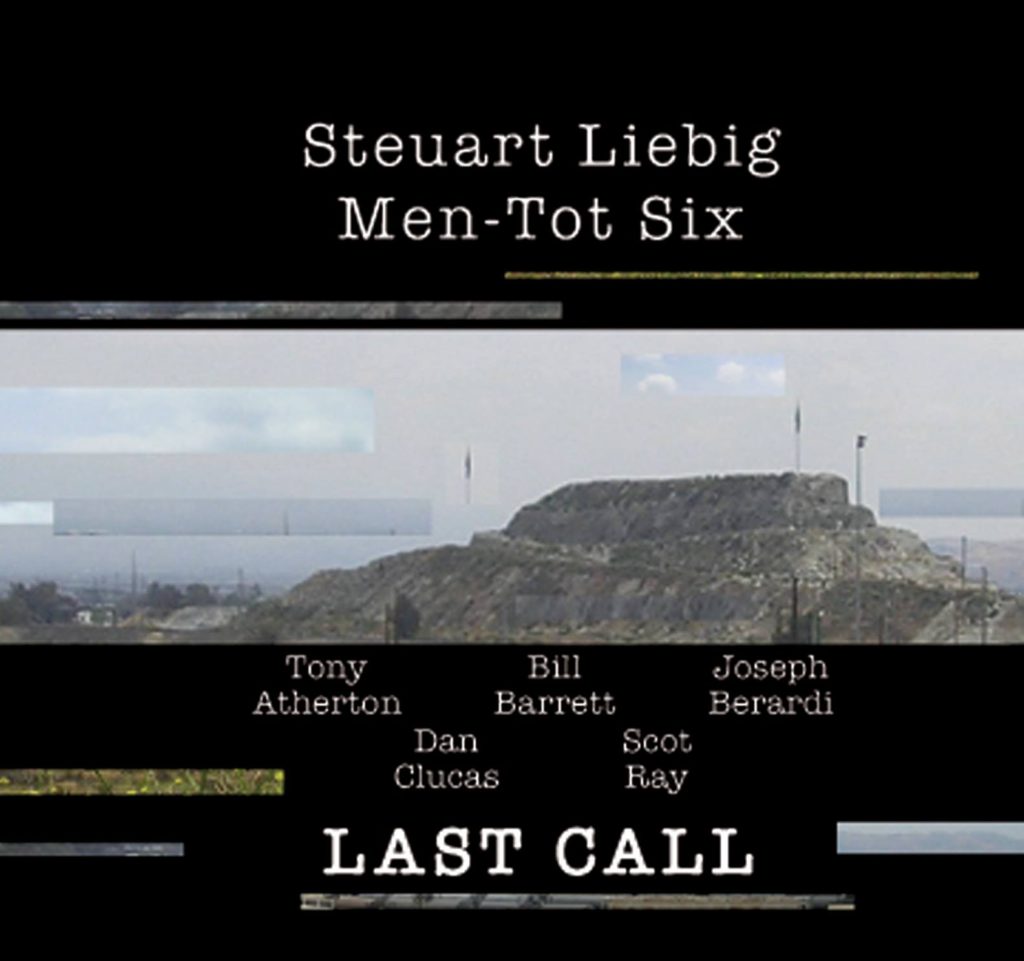 On the 22nd, Liebig, Ojai flutist and vocalist Emily Hay, and nomadic pianist Thollem McDonas played in Ventura, and on the 30th he was part of a 12-member group convened by the ROVA Saxophone Quartet to open the Angel City Jazz Festival at Zebulon in Frogtown.

On October 15, Liebig will return to the Blue Whale for a rare appearance as a composer/bandleader rather than as an improviser/collaborator. This will be the CD release party for Last Call, the recorded debut of his Men-Tot Six and the first disc of his compositions since 2009.

The Men-Tot Six combines two of Liebig’s quartets: The Mentones, named for the Culver City street where he lives, and the Tee-Tot Quartet, named for Rufus “Tee-Tot” Payne, an African-American street musician who taught Hank Williams to play guitar. Both groups explore connections between jazz, blues, and country music, and both share the rhythm section of Liebig and drummer Joe Berardi, so in this case four plus four add up to six.

Steuart Liebig was born in Santa Monica and grew up around LA. After graduating high school, he spent several years as a professional guitarist with soul-jazz pianist Les McCann. He played on four of McCann’s 1970s LPs and toured with him. However, the bass was his primary instrument.

He had begun playing bass guitar in 1970, occasionally played it with McCann, and had played upright bass in high school. Through the Santa Monica College jazz band, Liebig connected with young Westside jazz players John Beasley (who went on to play with Miles Davis and become a major artist himself), and twin brothers Nels and Alex Cline (Nels is now best known as the lead guitarist of Wilco).

After his time with McCann, Liebig studied classical bass at Cal State Northridge while freelancing on both types of basses, in situations ranging from jazz fusion with Dianne Reeves and Billy Childs to rock, funk, and Latin bar bands. By 1985, after experimenting with electric upright bass and altered tunings on bass guitar, he focused on 6-string electric bass.

In the early 1980s, Liebig, along with the Clines, joined the JAH Band, not a reggae group, but named for its leader: St. Louis free jazz saxophonist Julius Arthur Hemphill, a founder of the Black Artists Group and the World Saxophone Quartet.

Liebig, along with Nels Cline, and keyboardist Wayne Peet formed a group called Rhythm Plague, which crossed over from jazz into the budding art/punk scene, using drum machines in live improvisation.

This history continues in the new Men-Tot Six album, which was recorded in two days last November at Peet’s Mar Vista studio Newzone. Like most jazz records, it was cut with the whole band playing together live, but with enough separation that occasional mistakes could be corrected through edits or punching in.

There are also a few places where there were larger edits, for example, if take 3 was the best overall but the saxophonist’s best solo was on take 2, but overall Liebig and Peet worked to preserve the raw excitement of the performances while still giving the best possible representation of the compositions and players.

Liebig met drummer Joe Berardi in the mid-1980s, when he was asked to audition for the new wave band The Fibonaccis. Liebig was too busy with his own rock band BLOC, but their paths continued to cross, notably in the band Unique Cheerful Events with GE Stinson and Kaoru Mansour in the 1990s. As the rhythm section of The Mentones and the Tee-Tot Quartet, they often evoke the progressive blues/rock explorations of the 1960s and 1970s, albeit with more restraint or technique, as the situation requires.

Between 1993 and 1997, Nels Cline ran the New Music Mondays series at the Alligator Lounge in Santa Monica. The regular program of three sets each week, two by guest bands and the last by Cline’s trio, was invaluable for developing a network of musicians, as well as Cline’s own work. Liebig first heard and met most of the Mentones and Tee-Tot frontlines at the series.

While the sophistication of jazz and the raw energy of punk initially seem antithetical, many of the LA punk bands on the SST label, such as Black Flag, the Minutemen, and Saccharine Trust, were big fans of free jazz. Mentones saxophonist Tony Atherton played at the Alligator with Bazooka, one of the later SST bands who made the jazz connection more overt.

Tee-Tot cornetist Dan Clucas appeared in a band led by Richard Wood, while Scot Ray, who plays lap steel guitar in the Tee-Tot Quartet, was originally a trombonist. He played at the New Music Monday with an undocumented band called Theory of Everything. His 2004 CD Active Vapor Recovery features Liebig and the Clines. He later gave up the trombone, took up slide guitar, and left Los Angeles for Montana.

Liebig’s concept for The Mentones was “Ornette Coleman meets Little Walter,” which required a harmonica player capable of navigating quirky jazz melodies and improvising across idioms. Tony Atherton and Wayne Peet both recommended Bill Barrett, a master of the chromatic harmonica, probably one of the few people capable of handling this gig.

The Pfmentum label released the three Mentones albums, Locustland (2004), Nowhere Calling (2006), and Angel City Dust (2009); and Tee-Tot’s Always Outnumbered (2008). The economics of independent jazz recording, always marginal, had become so dire by 2009 that Liebig stopped making CDs as a leader, instead issuing a series of solo bass and/or electronics home recordings on Bandcamp.

He also largely stopped composing, because of his backlog of work and the difficulty of getting it performed or documented. However, he had already had the idea to combine the Mentones and Tee-Tot Quartet into the Men-Tot Six and written most of the music for this fantasy band. When Bay Area bassist Lisa Mezzacappa asked him if he had a project which could play on the JazzPop series she runs at the Hammer Musuem, he recognized a chance to make this band a reality.

They made their live debut at the Hammer in August 2017, then reconvened in November to record. This is a particularly difficult group to assemble and schedule because some members live out of state, others tour extensively, and all are irreplaceable unique musical personalities.

Their CD release show on Monday October 15 at the Blue Whale may be your only chance to hear this music live. They will play two sets, presenting the entire album in order, starting at 9:00 p.m. Admission is $10.

*Disclosure: I am active as a performer and concert organizer in the same small and highly collaborative scene as most of the people in this article and have played with and/or presented many of them.