The event was organized and hosted by the Los Angeles Business Council (LABC), an organization formed with the mission of promoting environmental and economic sustainability through partnerships between business and government. This year’s architectural awards set out to honor “innovative, sustainable designs fit for L.A.’s modern needs.”

The grand prize in the Retail/Restaurant category, was presented by Culver City Mayor Thomas Small, and awarded to Chef Jordan Kahn’s Vespertine, located in the Hayden Tract of Culver City. Nicknamed, “The Waffle,” it offers what is described as “a multi-sensory, multi-level and otherworldly ‘dining-as-art’ experience,” priced around $1,000 for two. Los Angeles Times restaurant critic named Vespertine  “The Best Restaurant in Los Angeles.”

Presenting the award Small said, “Vespertine was designed by world-renowned architect Eric Owen Moss, and is a two-story structure separated into four levels, of which no traditional walls support the building. Instead, the building is wrapped by an architectural skin–a curtain of undulating steel and glass.”

“Unusual to the point of impossibility,” Small continued, “The intimate 22-seat dining room sets the stage for an enigmatic dining experience, comprised of a succession of over 18 courses…It is a gastronomical experiment seeking to disrupt the course of the modern restaurant.”

Located in Blair Hills across from La Cienega, is The Stoneview Nature Center, opened in April 2017 as an extension of Baldwin Hills Parkland. Teams were vetted and asked to take part in Los Angeles County’s first Design-Build competition. The objective–to transform a five-acre brownfield site into a serene and sustainable community garden. The project’s multi-layered solution created by the various contributors represents “a unique story of community, engagement, and healing.”

Under Construction Category Winner (1 of 3): The Culver Steps

The Culver Steps construction continues in downtown, adjacent to The Culver Hotel. This construction is a public and private partnership between the City of Culver City and Hackman Capital Partners. It will offer more than an acre of mixed-use space comprised of four stories of creative offices, retail/restaurant venues and 35,000-square-feet of public plaza. The Culver Steps was coined because of a “grand architectural staircase that [will cascade] down the side of the building, forming landscaped terraces and seating areas.” 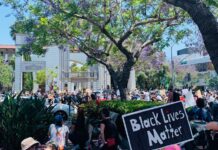 Meghan Markle family tree: Who is in Meghan’s family? Who are Doria and Thomas?

School Board VP, Kelly Kent: Take It To The People